The 10 secrets of being a good conversationalist 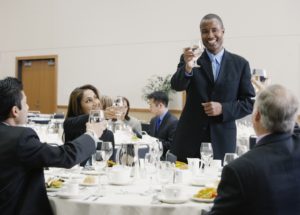 Being a good conversationalist is the first step in establishing rapport either in the United States or internationally.

Being a good conversationalist is the first step in establishing rapport either in the United States or internationally.  Mastery of this skill was required  before the age of the I-Phone and social media.  Spending time actually conversing with people is the exception rather than the rule for today’s young professionals and for those who are entirely addicted to their electronic appendages, having to spend time in conversation results in withdrawal symptoms such as restless leg syndrome or fidgeting with an empty plastic water bottle (this actually happened at a meeting I attended).   True, the topic may be boring, but again, good manners dictate that one should not show this and listen politely showing interest feigned or otherwise. To be seen as a well-rounded professional, the solutions are as follows:

The best conversationalists are the best listeners!